Coding to the Moon: Margaret Hamilton and the Apollo Missions 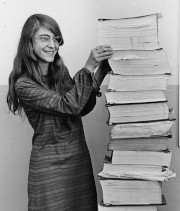 Description:
Watch the gripping, live play that tells the story of the Apollo Space Missions from the perspective of how NASA computer scientist and software engineer, Margaret Hamilton, led the team that created the Apollo Guidance System (AGS) that sent men to the moon and back. The production celebrates the life and work of Margaret Hamilton, with early scenes set in Michigan's Upper Peninsula, where she spent her childhood. Later scenes at MIT's Instrumentation Lab show where Hamilton and her colleagues built and programmed the AGS that laid the groundwork for almost all of today's modern computing. The play highlights the daring and risk involved in the space missions program and how Hamilton's team averted last-minute disasters during the flights of Apollo 8 and Apollo 11. Historical photos and footage will be used, in addition to the live stage actors. Presented and performed by Wild Swan Theater company.

Read more about Coding to the Moon: Margaret Hamilton and the Apollo Missions (external site)